Posted at 11:48h in Uncategorised by rmcrgegor 0 Comments
0 Likes

What the hell did we get out of it?

All Patriots know the Clinton Foundation is a cosmically sized corrupt entity.

However where did A$130 million of our taxpayer dollars actually go?

More importantly what was the Quid Pro Quo?

Obviously Downer/Gillard/Rudd/Abbott/Bishop/Turnbull all siphoned off the money via DFAT.

However why have the MSM completely covered up the largesse?

Q of course originally posed the question in post 484: “Where did ALL that money go?” and “What did AUS/UK obtain in exchange for all that money?”

Well; I can tell you that I filed a FOI Request on the CF with DFAT and they refused to provide any information. Imagine my shock.

It’s not like the Aussie arm of the Clinton Foundation was run out of a shack on a suburban dirt road in rural Victoria; whence the directors upped and left the country as soon as Trump won.

Anyways, to bo be sure, the CF was of course based at the US State Department. The purpose was to provide a pay-to-play and money laundering scheme for Deep State elites worldwide. Kickbacks come in the form of book/netflix deals, corporate shenanigans and straight out money transfers.

Ukraine was a major hot spot for this fraud and Trump will soon be exposing the full money trail (hint – AMB Yovanovitch will be central to this). However every country that participated in the CF used it as a way to bilk their taxpayers and engorge their elites through these kickbacks.

So no doubt our grifters were not doing it for free.

DFAT has of course been using Foreign AID as a tool for kickbacks since day one. It’s why it exists. Also oil, gas and even building submarines avail all sorts of oportunities.

However was there an even more nefarious payout wrapped up in this CF game? 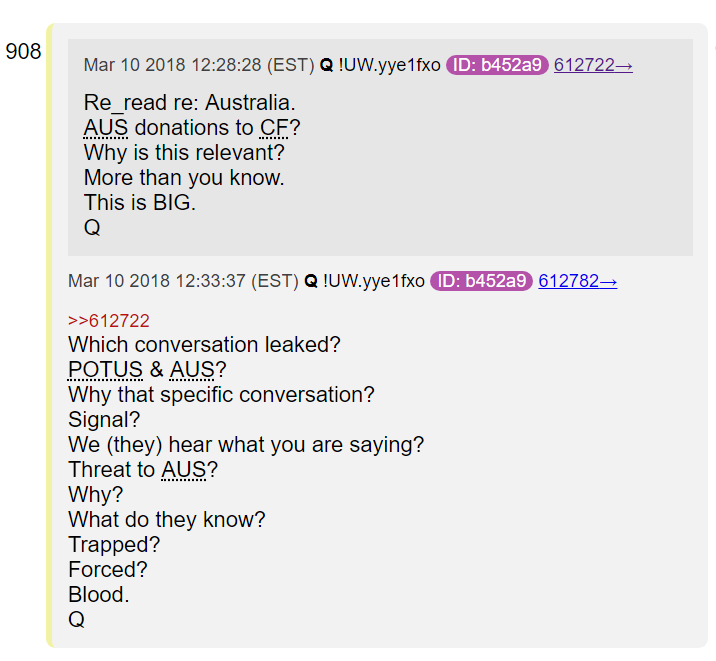 Yeah, graft and kickbacks is big, but is it really as “BIG” as Q says?

What if Brennan (the organiser of the Trump coup d’etat) was using his Hammer (HAMR) supercomputer to unmask and provide full-spectrum enemy profiles for cash?

As a FVEY member we could get info for political and corporate blackmail on fellow Australian’s by skirting legal prohibitions using our US ally.

Is that what this is about?

Are we “trapped” because we have been obtaining, sharing and using nasty stuff?

Interesting to note is that Mark Ryan was the ex-Head of the Australian Underwater Acoustic Intelligence Agency and also the former COS to Alexander Downer.

Now we all know Ambassadors are the Chief spook wherever they are assigned – it is their main role. So why was Alex hiring a guy who specialises in tapping data cables as he was lavishing the CF?

In other words, was the Quid Pro Quo actually cash for intelligence, as well as financial kickbacks?

Our MSM, Politician’s, DFAT and the Judiciary will NOT investigate.

It is up to us Patriots.

We need a forensic audit of the CF.

I am optimistic President Trump/Huber/Durham will help us from the US end.

I know I’ve been through this stuff before but it’s worth bringing it all up again.