Posted at 22:28h in Uncategorised by rmcrgegor 0 Comments
0 Likes

We don’t need Q to tell us President Trump set up the DNC and played them for total fools.

The MSM fell for the whole charade and are now apoplectic.

The transcript was a total nothingburger.

As I said prior to the release of the transcript, Rudy Giuliani, was deployed to bring the corruption of Biden to the masses and most importantly to get normies eyes on Ukraine corruption and interference in the 2016 election.

The big breadcrumb for the masses was the mentioning of Crowdstrike in the transcript.

As you may recall I pretty much explained all there was to this corrupt Clinton entity back in posts on June 15th and June 16th – A. Hence I shall not go over it again.

Suffice to say, Crowdstrike and the HRC Server are now in full view. 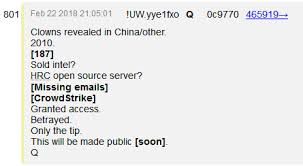 So what is the big picture from here?
Quite literally there is nothing the Deep State can do – except kill.
Trump can open up any of the thousands of crimes committed at his leisure.
The MSM is becoming increasingly irrelevant.
They will ignore Crowdstrike but the problem for them is that normies can now see they are covering up major corruption.
8chan will be back sometime early next week. Q may make an appearance soon afterwards but it doesn’t matter at this stage. The Q Team can take their time.
The drip drip of unmasking the Deep State is necessary for mastication of the information provided.
I can “feel” the shills on VOAT giving up. This recent impeachment trap was the last blow for them. Their financial backers may continue to pay, but the effectiveness, of their disruption tactics, is done.
Please don’t think I’m saying it’s over. It’s not. We must continue to fight.
On a personal note, I am very proud of the work I did on ScoMo.
I hit him repeatedly on 8chan and Voat and demanded he get on board. I also delivered letters to his Office etc.
No doubt he is a part of The Great Awakening now. Trump has shown him his cards and ScoMo folded.
Did my efforts actually help…..probably not…..but they were right in his face and damn clear.
Anyways, history has turned, we are in control but with plenty to do.
The ABC completely ignored Crowdstrike today. They do love their criminals.
Much work for us still Patriots.
Make Australia Great Again,
Dr Russell McGregor
@killaudeepstate
WWG1WGA