Posted at 12:38h in Uncategorised by rmcrgegor 0 Comments
0 Likes

This is my first blog post after the bombshell developments regarding Jeffrey Epstein.

I shall continue to refer to The Council as the “Epstein Island” of Australia as they and their associates knowingly protect paedophilia.

My case has not changed one jot since my initial blog post in January 2018. I have been completely consistent since the get-go.

That is, the fact that The Council has knowingly and criminally used the ‘Political Abuse of Psychiatry’, to deliberately destroy and silence me for whistleblowing/Journalism, with regard to exposing the veracity of QAnon (US Military backed) and Satanic worldwide Child Sex Network Abuse and Trafficking.

Similarly it is also a fact that elite Liberal Party Politicians of whom I am a constituent have sacrificed me in order to protect their elite Liberal Party and Deep State mates from significant crimes against The People of The United States of America.

In short, my case is a Government Deep State cover-up of QAnon, Ritual Sex Abuse (RSA)/crimes against children, as well as an attempted coup d’état against President Trump by UK/Australia.

The MSM has been forced to cover the Epstein developments although they are desperate to hide the real story, which I have discussed repeatedly for 18 months. Importantly, my blog post of 27th July 2019, written prior to recent events, outlining the involvement of intelligence agencies for blackmail and geopolitical control remains off-limits.

Epstein Island, as all QAnon researchers know, is not an isolated case. There are many Deep State cells worldwide whom practice RSA of children for elite cohesion and blackmail purposes, including Australia. It is a business model for control. The higher the level of elites, the more Satanic the behaviour. Children are their currency.

I will not be silenced and abrogate my right to freedom of speech. Nor will I abrogate my responsibility to expose heinous crimes which the MSM ignores.

Declassification continues unabated. It is being delivered in a slow methodical manner so public absorption can occur at each step.

The most recent disclosure (yesterday) was the preliminary findings from the Senate investigation into the Hillary Clinton server.

Q gave us the heads up on this 18 months ago: 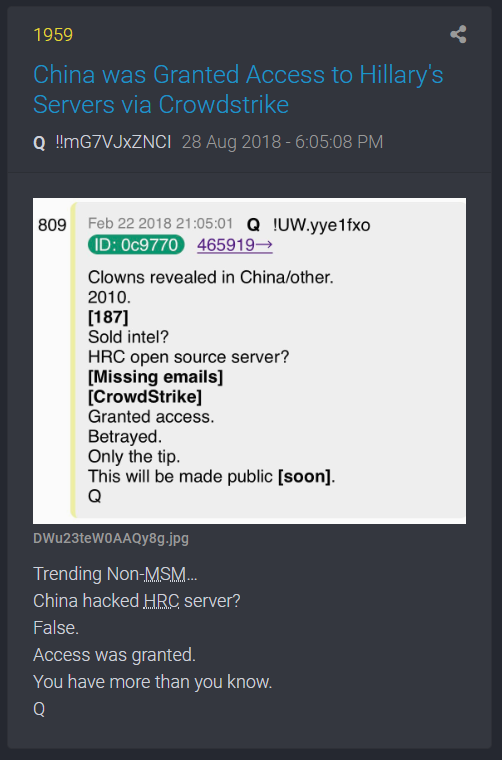 She will hang for this alone, independent of all her other myriad crimes.