Posted at 03:02h in Uncategorised by rmcrgegor 0 Comments
0 Likes

NEW BOARD OWNER GETTING ATTACKED

The 8chan Board Owner (BO) has recently changed on qresearch as the previous one had to leave for RLE (Real Life Events).

Shilling increased to place pressure on the new BO (Fastjack).

In response the BO attempted to simplify each bread (group of posts) by removing the War Room and qproofs.

The changes were causing grievances and quite a stir so Q clarified in post 3416 that the BO should take heed by looking back to an Anons complaint. This was a statement by Q telling the BO to pull his/her head in: 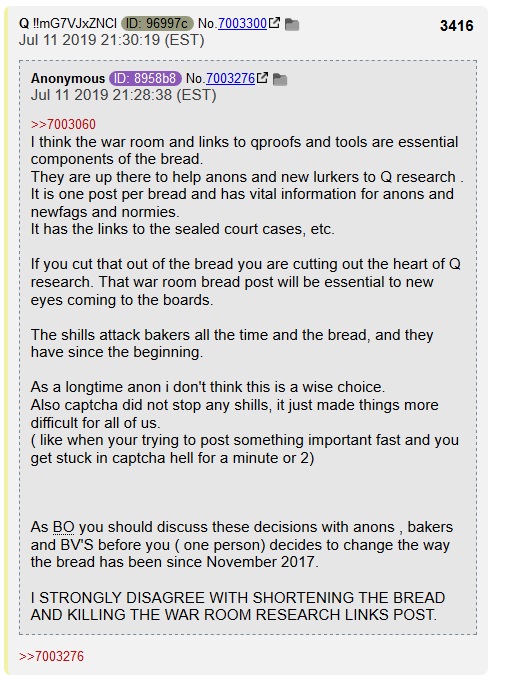 Here are examples of the recent shilling provided in notables:

>>7007934 Will BO make namefagging mandatory as next shitful move?

As you can see there is no quarter given on the boards. None at all.

Anyways for anyone following this, I feel it is a contrived problem, that will die down.

There is no way the BO is not on-plan.

The whole charade is to highlight the need for all to check the War Room, qproofs and notables instead of glossing over them.

Many Anons use the notables as a form of substitution for the MSM and even alt-media.

In a sense the notables are a compilation of the most important news stories of the day being fed in by top autists worldwide to the boards in real-time. The cutting edge stuff that is too dangerous for others to touch.

More eyes on these aspects is simply what Q wants us to do.