Posted at 09:06h in Uncategorised by rmcrgegor 0 Comments
0 Likes

THE ENEMY OF THE PEOPLE

The worldwide MSM has once again demonstrated their complicity with the Deep State and their criminality.

They are indeed the Enemy of The People.

On the morning of July 4th in DC the following tweet was sent out by the Bush Family Mafioso: 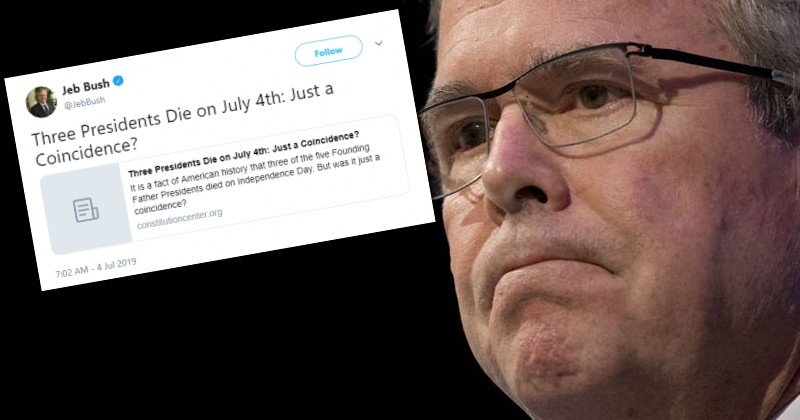 This was a very clear and blatant message that Jeb wanted President Trump assassinated whilst addressing the crowds at the Reflection Pool/Washington Monument.

So what did the MSM do when a former Florida Governor who ran for President made a death threat against his sworn enemy – NOTHING!

One of he most connected and powerful Family dynasties issues a death threat and crickets!

Yep, the MSM completely ignored it! All good.

Imagine even the slightest whiff of a threat against Obama….

The twittersphere went into meltdown with almost universal condemnation. The People do not accept such behaviour even if the MSM kills it with silence. Jeb refused to remove the death threat despite the backlash.

Jeb Bush was of course born into the Deep State. He was supposed to have been the Republican nominee who fell on his sword to let Killary become President. Didn’t happen.

Similarly there was no assassination on 4th July.

The President is fully insulated.

Problem is, Jeb only showed the world how utterly desperate both he and the Deep State have become.

His actions have simply highlighted that they have lost power.

White hats are in control.

The Deep State are in PANIC.