Posted at 20:22h in Uncategorised by rmcrgegor 0 Comments
0 Likes

Abortion and the Satanic Deep State

Q has just added Post 2674. Interestingly the Q Team was dark for almost three weeks after Post 2673. As Q states this was no coincidence. We have obviously been directed to dig on all things Abortion and see where our research takes us. Understandably 8chan has been all over this and recent events in New York and Virginia have been very relevant. Q clearly knew in advance that these events would occur and wanted us to be prepped.

I shall put everything together at the end of this thread today.

Fortunately as a Doctor I have an understanding of the material and will be able to make as much sense of it all as anyone else with only open source access. To be up front, obviously I am pro-life. My conclusions will be my own and not that of Q.

It would be remiss not to discuss Abortion without referring to the Deep State Demi-God.

The MSM has made RBG a virtual Saint who is above any criticism. Indeed any ill talk of her leads to potentially violent reactions by SJW’s. SJW’s don’t just respect her they love her. She represents everything they are told is moral.

Patriots however know exactly what this pure POS and filth represents.

She is a pure Satanic Deep State whore.

Let me refresh exactly who this animal is.

I have written extensively on her many months ago but shall do so again.

RBG is the leader of the progressive faction on the Court. She is rabidly leftist and supports every Deep State Satanist agenda possible. She is pure evil and her intention is to destroy society so it can be completely overtaken.

Let me introduce her ideology: 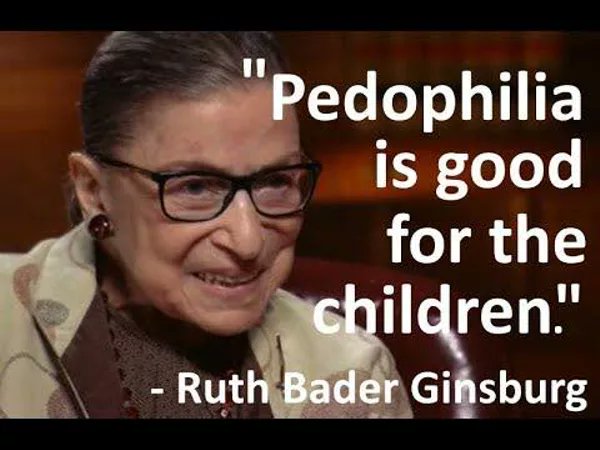 Yep she is a Paedophile. Her long-standing position is that the age of consent should be lowered to those “less than 12 years old”. This has been on the record ever since she was interviewed by Congress for the job decades ago. Congress ignored it and covered it up. RBG has never repudiated it, so it remains on her record unchanged. As seen above she has continued to avail her beliefs unchallenged. All Patriots know her views as does the MSM. The MSM loves it and protects her completely.

RBG is pro-Bigamist and wants to obliterate the Traditional Family. She wants Censorship of any opinions opposing Feminism including inappropriate pronouns.

Importantly she opposes the Mann Act. This act prevents the interstate sex trafficking of women and children. She considers it “offensive”. Well that makes sense for a Feminist. You guessed it. She’s against the Wall. Gotta keep them kiddie rack lines flowing. They are yummy.

Here is a compilation of her views:

In short, RBG is a Deep State Satanist who engages in all the requisite activities that HRC enjoys. Lovely.

Can you remember Antonin Scalia? I discussed him way back. He was also a Paedophile, but I digress. Well he was murdered and within one hour the MSM was all over the story begging for a new Supreme Court Judge to be appointed immediately.

So where is the MSM now? RBG hasn’t been seen for two months. She is said to be completing cases from home. Questioning whether she is alive is a right wing conspiracy and bigoted. Transparency? The MSM does not seem to understand that the law must be done but also must be seen to be done. Getting her clerks to write cases is Sedition. Hypocrisy? No, just Liberalism.

Anyways, RBG is a Gold Standard Aborter. Full-term, After-birth, whatever, all good.

continued in part B