Posted at 19:57h in Uncategorised by rmcrgegor 0 Comments
0 Likes

The Great Awakening ‘Movie’ is turning into a Comedy!

One month or so ago I tried to make sense of the General Flynn hearing, which seemed like a complete comical farce. It was, and now some new info has come up which confirms as such:

The cited text is from the completed Plea Bargain for General Flynn as compiled by Judge Sullivan.

If you read through the transcript from the hearing in December you will note that General Flynn and his lawyers did everything they could to plead guilty even though the Judge kept saying he wasn’t guilty to the idiotic process crime. The Judge cracked some jokes as he was going and made up a laughable comment about Treason – which Flynn agreed too!

The real reason General Flynn wanted the process to continue was so he could give evidence at the Military Tribunal’s in Gitmo. I stated as such but the evidence is above where the Plea includes a clause where he needs to “participate in covert law enforcement”. Remember Q said, ‘who knows where the bodies are buried?’ – certainly General Flynn knows! Now obviously prior to his Military service he signed a non-disclosure agreement (NDA). He would not be able to testify unless he was a part of a Trial, and thus the agreement is void until sentencing. He has taken a bullet for the team. Judge Sullivan knows and was on-board.

The next confirmatory proof is the following: 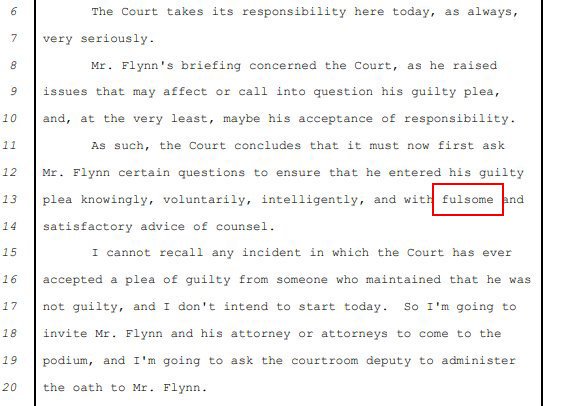 Can you guys remember 12 months ago, when I posted the Project Fulsome document signed by Barack ‘Bathhouse Barry’ Obama? I sent this document to the MSM and Politician’s who outright refused to investigate or even comment that they had received it. Well that document is the real deal and shows the Five Eyes #Spygate scandal in it’s full glory. So Judge Sullivan is telegraphing that General Flynn is giving states evidence against the Cabal. He is trolling the Deep State big time. It’s a cack.

The chatter is that Brennan and Strzok are currently in Gitmo and possibly being prosecuted as we speak. Some say their trials may be broadcast live or perhaps delayed for later (which is more likely). Obviously Susan Rice, Sally Yates and HRC/Hussein are also affected by Project Fulsome as well as many others. They will all likely be hanged. The Alliance will not have proceeded unless they had all the evidence ready to go and were assured of success. The crimes will be manifest and not confined to Project Fulsome.

I most certainly do not resile from the fact that I called the Cabal’s Twitter accounts to be under NSA control (the first in the world I reckon). This is correct, they are.

Military Trials are notoriously quick. If capital punishment is the outcome, this occurs in as little as a few days after completion. They will be recorded, and redacted for National Security issues if released to the public.

The trial of each Cabal member will elicit information to be used against those further up the chain. Each player will no doubt plead they were following orders. Thus HRC and Hussein may be last. Note the timings and public disclosure is all speculation. The fact that they are occurring is not. 9/11 Truth will likely be exposed as a by-product. The rats will ultimately do anything to save themselves once they know their fate and will dump on each other.

Do not forget that Australian’s were involved with Project Fulsome too and the MSM here is fully aware.

continued in part B: