Posted at 20:43h in Uncategorised by rmcrgegor 0 Comments
0 Likes

We are witnessing history. The month of December will see the greatest political change of power in our lifetime and arguably centuries or more. The first week potentially will be the most explosive. Military Tribunals will only come into effect 1st January. All the main MOABS must come prior to the House sitting on 3rd January, although shock waves will continue for months.

Monday 3rd December will be the beginning. As Hannity has alluded to, there will be a major first strike. We know of at least two whistleblowers inside the Clinton Foundation and we also know there is a very high likelihood that a Grand Jury has been impanelled to investigate for one year. As mentioned the Clinton Foundation is the centre of a global child sex trafficking network co-ordinated via the FBI, CIA, House of Saud, Vatican, MI6, ASIS, GCHQ, FIS, BND, CPSA, SZRU, VSSE, Swiss Guard, Windsors, DPSD and HCSE. The State Department was also integral; particularly when Hillary was Secretary of State. These networks have ebbed and flowed in relative importance depending on the political environment in each area of the world. Prior to the CF these networks have been in place for a very long time, although the CF has achieved a centre of excellence in money laundering, political donations, assassination and leverage. Little wonder the Liberal Party refused to answer my questions about the $88 million minimum sent to the CF from us. I also requested an audit of monies. Strange they were delighted for me to be deemed Psychotic by their Deep State operatives.

There is no question that indictments are to be unsealed by Horowitz/Huber which will demonstrate corruption on a grand scale. Uranium One will be front and centre. U1 as mentioned extensively several months ago; involves the selling of 20% of US Uranium to Russia with kickbacks to the Clintons. The web is vast. The Clinton emails will show the ugly details of everything and Mueller involvement. The private server was used to obfuscate all the dealings. Pay to play treason for selling Military technology to China is well known. Trump has it all. Haiti will be exposed and many will be very angry with the Crimes against Children.

When Epstein is cross-examined the Paedophilia and worse will be opened. Essentially he got $1 Billion to build an island devoted to Moloch and feed it flesh. His handler will become apparent. It was all about leverage. Little Saint James Island was for Deep State Satanist Politician’s. Conversely the Playboy Mansion and The Standard Hotel amongst other places was for Hollywood elites. Pamela Anderson had the goods on these people, stealing from Hugh Hefner and gave them to Assange. Ever wondered why she was always in the Ecuadorian Embassy? Julian has thus been marked for Arkanside for a number of reasons. He will show that Seth Rich was responsible for the DNC hack and the Clinton/Obama setup framing of Trump will be exposed. Similarly the FISA release (D5) will play it’s part. Rosenstein will have his signature on the FISA fraud. Australia and the UK have inserted agents to spy on Trump and gather intelligence via FVEY to feed to Obama/Clinton. I have documented these Acts of War extensively. This is why the Australian Government has bankrupted me. Comey will testify prior to dump and will perjure himself royally. Loretta Lynch may have flipped given the NSA evidence of the Tarmac meeting. William Binney has supplied all comms.  Assassination plots against Trump may be revealed. Rack lines of drug, organ and child trafficking will be seen. The importance of keeping the border open and having ICE removed for transit ease will be apparent.

Just remember Trump’s business model. He never breaks promises and always delivers. Everyone knows the ramifications of his tweet below. The Deep State is done. The MSM can not even bring themselves to cover the victory announcement. To them it didn’t happen. 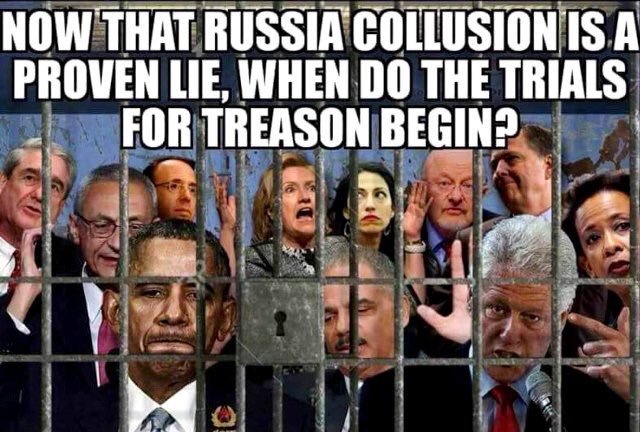 As I have always said – we will have the Australian Treason Trial’s here (ATT’s) – kudos to Brian Wilshire though.