Posted at 23:22h in Uncategorised by rmcrgegor 0 Comments
0 Likes

I am resigned to my fate if the Deep State remains in power here. I fully understand Patriots will be purged. It is a certainty of history. At best I will likely never be allowed to work as a Doctor again. At worst I will be made an example of. However my conscious is crystal clear and I have no regrets. Make no mistake this is a geopolitical war of historical significance and consequence.

Roughly four days ago I posted on VOAT trying to sum up the situation and asking for suggestions about how Australia could potentially deal with the cards at hand post-FISA DECLAS. I knew it was not in vain as the Q Team definitely reads every VOAT post on QRV. My post is below: 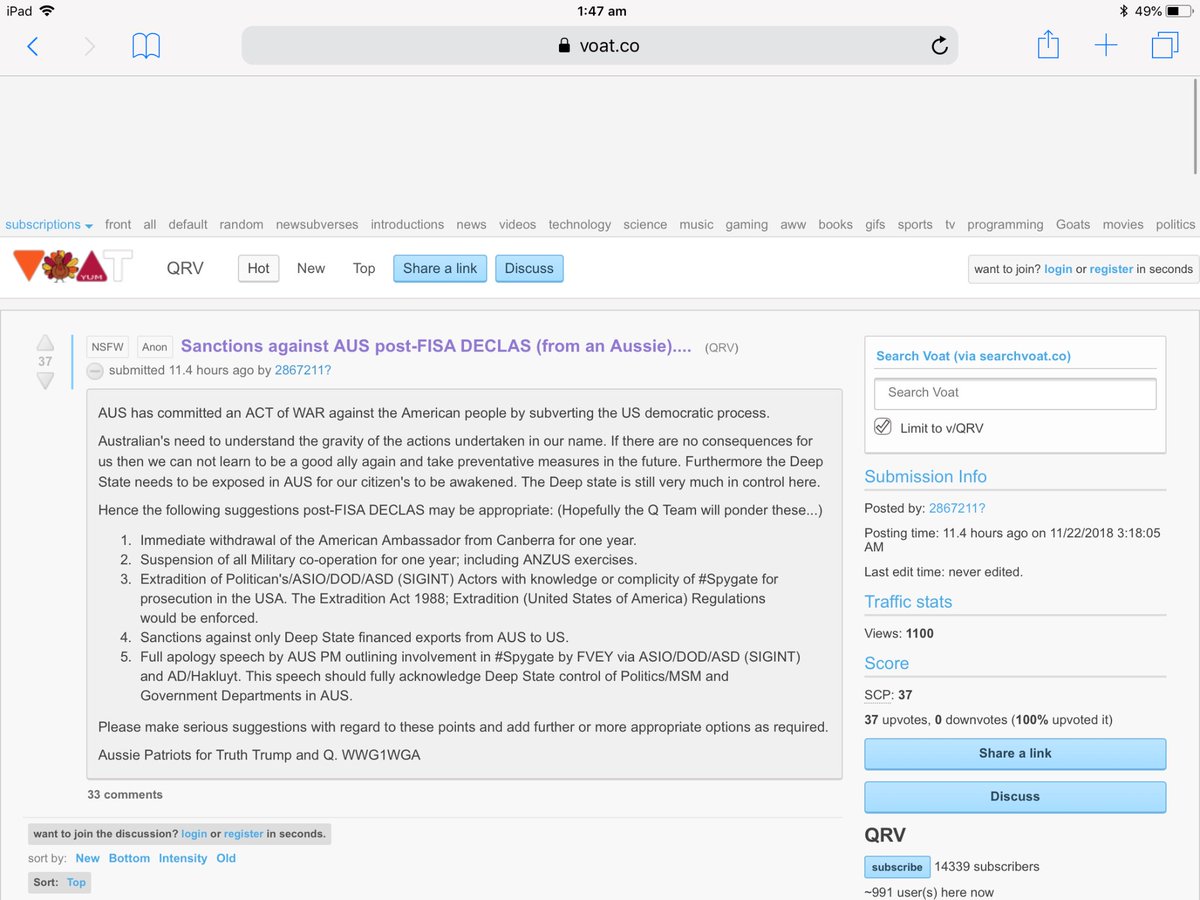 Now obviously Q and President Trump had ‘The Plan’ fully sorted years in advance and don’t need any help from random posts; not even one billionth of a degree of help. However it was interesting/coincidental to see the Q drop 2501 from early today…

I shall rehash the last few sentences:

Does UK stand w/the US or only select divisions within the US?

Does AUS stand w/the US or only select divisions within the US?

Will immediate action(s) be ‘publicly’ taken within each country to REUNIFY THE BOND that was once held PRIOR TO……[CLAS 9]?

Australia hangs in the balance

There is simply no way to underestimate the shear gravity of the historical decision Australia finds itself in. We are on the edge of the most critical geopolitical choice we have ever had.

Trump is essentially saying to the UK and AUS – what are you going to do? He is acknowledging the bond between allies was significant and important but has now been cut. Actions are required to fix the damage and these MUST be public.

Can we imagine a world where the US, Russia, and China are geopolitically opposed to UK, Germany and Australia? This is the Grand Game that Trump is describing. If we chose poorly then we may be one of just a few countries with Deep State control. The consequences for us could be shattering. Koala is genuinely in the [killbox]. Now as a double meaning, Operation Koala was a Paedophile sting originating in AUS years ago. The NSA could have some leverage too.

Let’s assume that AUS does not apologise and remove all Deep State actors responsible. AUS would be betting on the Cabal and riding out President Trump. Fine for our leading Pollies, but that is a huge gamble. Sanctions would be crippling and anger would be huge. The Liberal Party would lose the next election due to the friction. The bond would be finished. The problem is that the Deep State is fully entrenched here and may be prepared to damage the country significantly for fear of losing power. Sure there is the possibility that the Morrison faction is less DS than the Turnbull faction, but they are all DS no matter how you look at it.

However there is one factor to our advantage as I see it. Just one really. It only takes one man to apologise and admit the whole sordid mess. It can be done without Cabinet or House of Reps approval. Indeed Morrison has already apologised for RITUAL Child Sexual Abuse, albeit without changing anything.

Thus if Morrison takes the plunge of his life then our country could start the process of ridding ourselves of the Deep State forever. It doesn’t matter what Westminster/May does. He could even ride a wave of pure gratitude and win the unwinnable. This is not important though – blowing the whole popsicle stand is.

So the most important question of our time as Australian’s should be posed to The Hon. Scott Morrison, PM:

Are you a True Christian OR just another Satanist?

If you can get this message to our Prime Minister, it would be wonderful. Otherwise Pray; whatever your Brand.