Posted at 14:04h in Uncategorised by rmcrgegor 0 Comments
0 Likes

The Enemy of the People

President Trump is finishing off a complex Military Intelligence War Gamed, Game Theory battle with the MSM. They know they are being taken down and can do nothing to avoid it.

A couple of days ago Q was brought to the Mainstream. The Deep State knew this day would come and only had one play. That was to mock and satire the Q Phenomenon. The rump of the Deep State CIA leftovers sent out their Mockingbird 4.00am talking point orders Worldwide. The result was a uniform line of attack using the same words and approach. 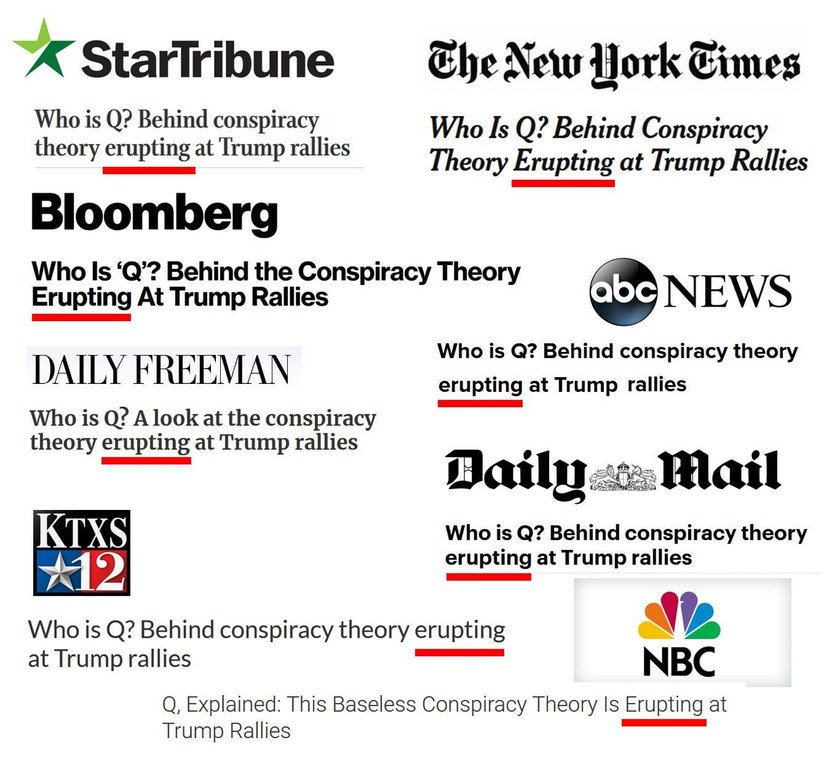 There is nothing else the MSM can do at this point, they are helpless.

Do not fear MSM, this is all just a part of The Plan. You should just enjoy The Show.

Essentially the President is just setting the MSM up. It is the final arm of the Cabal left to fall. Here’s my take:

Step one – Q becomes Mainstream. Timing was when Q Intel was ready to go.

Step three – Escalation of attacks against Q by MSM/Deep State.

Step nine – End of MSM. Understanding by populace that MSM was the enemy of the people.

Hoping this whole Q thing is a LARP? Not official Government Military Intelligence?

Remember this is a prepared tape which can be reshot if needed!#QAnon #MAGA #RedWaveRising #1776 https://t.co/7YbzmOSzaF

Herein above is a video from yesterday which clearly states “Q just watch”. The President has attended multiple rallies this week drenched in Q signs. Do you think his staff would not have this edited if it was not sanctioned? Hardly.

So what will happen in Australia when the Great Awakening reaches critical mass?

The MSM will fight against Q; but they will at some point, eventually realise they are beaten. They will feign ignorance of the Deep State and that it doesn’t apply to Australia. This is when we must act and use every legal and non-violent tactic we can to exact change. We can not let the existing MSM be a part of the solution. They are Traitors/corrupt and must go. Knowledge is key.

We the people MUST do this.

In a sense this will be a type of McCarthyism but it will be necessary. Watch for the moves of the MSM here and do NOT forget their approach. The smart ones will back off sooner. There are some good people but very few.

The word on the street is that big conglomerates like CNN will be broken up and sold off. Australian MSM will be under the pump big time – think Fairfax.