Posted at 23:53h in Uncategorised by rmcrgegor 0 Comments
0 Likes

Here is a letter I sent to my Local Federal Member, The Hon Tony Abbott, MP and my Local State Member (Minister for Health), The Hon Brad Hazzard on 17th April 2018 (with acknowledgement of receipt):

To The Hon. Tony Abbott, MP

Re: Dr Russell McGregor
Dob: 21/11/67
Business Address: Suite 4308, Level 3, 834 Pittwater Road, DEE WHY NSW 2099
Home Address: XXXXXXXXXX (removed for blog)
Dear Mr Abbott,
Thank you for taking the time to read my e-mail.
My name is Dr Russell McGregor and I own and run a small Medical Practice in Dee Why. As you are aware with previous correspondence, I have been inappropriately forced to undergo Psychiatric Assessment by the Medical Council of NSW, for my Political beliefs with grave financial/reputational and career consequences. I note that you chose not to validate the veracity of the Q phenomenon, as requested by me, pertaining to Military intelligence direct from President Trump, for the Medical Board of NSW, in my matter.
Nevertheless I have two important separate matters, which as a constituent, I require an immediate response, due to the obvious gravity of the issues involved. Each involves potentially significant corruption at the highest levels of the Australian Government.
As background I refer to the Q Military Intelligence Asset of President Trump who posts on the 8chan Boards and also at qanonposts.com and qanonmap.bitbucket.io
Tony, both you and I know, that Q is direct intelligence coming from President Trump. Indeed it is possible that the President is Q. Your Government is fully aware of Q, as is ASIO. Any denial of the importance and interconnection of Q and the President is untenable by you.
As such I shall refer directly to the posts from qanonposts.com
Post 906:
Re_read re: Australia.
AUS donations to CF?
Why is this relevant?
More than you know.
This is BIG.
Q
Post 908:
Which conversation leaked?
POTUS & AUS
Why that specific conversation?
Signal?
We (they) hear what you are saying?
Threat to AUS?
Why?
What do they know?
Trapped?
Forced?
Blood.
Q
Post 1164:
Re_read Five Eyes.
Avoid US data collection laws.
Hussein.
Public: Dossier FISA.
Not Public: Five Eyes UK/AUS POTUS targeting using pushed
RUS decoy meetings / campaign insertions.
Hussein HRC LL Brennan Clapper NAT SEC WH SIT RM OP
UK AUS assist/set up.
Q
I also have attached a letter between Robert Hannigan (GCHQ) and Rt Hon Boris Johnson MP.
There are other Q posts referring to the ECHELON/PRISM etc etc etc signal intelligence networks set up and monitored by the Five Eyes, which includes Australia. You are obviously well aware of the Pine Gap and Geraldton bases etc roles in monitoring of peoples data. You are also aware that Australia provides information about each of the other four nations citizens to their respective Governments. This process is reciprocated to Australia.  All of this is designed to illegally circumvent Privacy Laws of the respective countries for political and corporate benefits.
The evidence (attached letter) shows that Former President Obama requested the UK Government to wiretap Donald Trump and his campaign members, both before and during the 2016 election, and after he was elected President. This surveillance was INDEPENDENT of the fraudulent FISA Court request and manifestly illegal. The Hannigan letter demonstrates this conclusively. Q states that Obama would hear the information each day at a briefing in the Situation Room.
Q (meaning President Trump) states that Australia set-up and assisted the data collection of surveillance of President Trump before and after the election.
Q also questions Australia’s donations to the Clinton Foundation, which he implies was fraudulent. Research suggests the Clinton foundation was a slush fund where sycophantic Politicians in Australia helped the Clinton’s launder monies. Any cursory perusal of the hundred’s of millions of dollars of Australian tax payers monies paid to the Clinton Foundation demonstrates little if any measurable outcomes.
Hence my two general questions are as follows:
1. Did the Australian Government engage in data surveillance of Donald Trump and/or his campaign through Five Eyes networks? Was this information shared with President Obama or other American Democrat Party operatives? Was the Australian Government aware of the UK tapping signals at the behest of President Obama? Did the Australian Government collude with the UK Government in setting up and assisting with any said surveillance? Was the Australian Government aware of said surveillance? Did the Australian Government upon learning of the surveillance inform the Presidential candidate under surveillance?
Clearly if my Government collected data/relayed data on a Presidential Candidate for subversion during an election campaign then this is an ACT OF WAR against the American People. As an Australian Citizen, I require urgent answers to these questions, and also a full list of the Australian’s involved. I understand my safety is at risk for asking these questions but I am an Australian Patriot and must do so as the MSM is covering this up.
2. I request that a Full Audit be performed both in Australia and in the USA of the monies given to the Clinton Foundation and where and what for our tax monies were distributed. I also would like to know why the Australian Government gave money to an organisation which was specifically Politically associated with a foreigner. Were there any known kickbacks/money/jobs to Australian Government officials or Politicians secondary to this largess?
I require an urgent response. I also request that actions be taken against any perpetrators to prevent this happening again.
e-mail – russellmcgregor2013@gmail.com
0400304664
Yours Faithfully,
Dr Russell McGregor
17/04/18 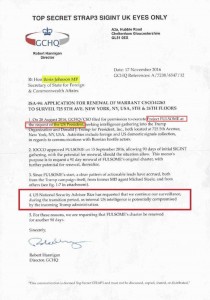